Katherine French is a DPhil student in Archaeology at the University of Oxford.

Thesis title: Vegetation History and the Conservation Of Plant Genetic Resources For Food And  Agriculture (PGRFA) In Oxfordshire

Luiseach Nic Eoin is a DPhil student in Archaeology at the University of Oxford. Her research explores the ‘gathered’ component of southern African hunter-gatherer subsistence, through a focus on grindstone technology and microresidues (plants and pigment). Research on ancient plant use in Lesotho has led to an interest in contemporary economic botany as Intangible Cultural Heritage, how this may be threatened by large-scale development projects, and the ramifications of this for policy enactment.

Thesis title: The Gatherer and the Grindstone: Analysis of grindstone technology from the site of  Ha  Makotoko, western Lesotho

Theresa Miller is a DPhil student in Anthropology at the University of Oxford whose research focuses on environmental aesthetics and varietal diversity maintenance in the Ramkokamekra-Canela indigenous community of Northeast Brazil. In particular, she is interested in understanding how Canela women and men gardeners value and make meaningful their engagements with cultivated crop species and varieties. Other research interests include shamanism, material culture studies, native Christianit(ies), food and nutrition, and indigenous experiences with governmental social assistance programmes such as Brazil’s Bolsa Família.

Lewis Daly is a doctoral student in Anthropology at the University of Oxford. Broadly speaking, his ethnographic research concerns the relationships between ecological knowledge and belief systems among the indigenous Makushi people of pre-Amazonian Guyana. In particular, he is exploring the cultivation of the staple crop bitter cassava (kîse) and a category of charm plants known as bina. Lewis is critically engaging with theories relating to ecological semiotics, techniques and material culture, post-humanism, the animism of plants, and Amerindian perspectivism. Other areas of interest include Amazonian ecology, agricultural diversity, shamanistic praxis, ethno-history, and political ecology.

Thesis title: The Symbiosis of People and Plants: ecological semiotics in Makushi ethnoecology 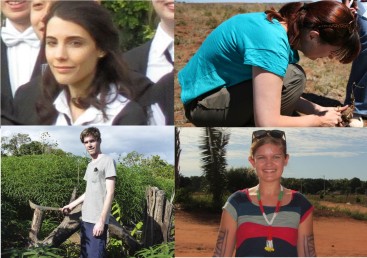 Professor William Beinart is the Rhodes Professor of Race Relations at the African Studies Centre, University of Oxford. His major research and teaching interests are in southern African history and politics and in environmental history. He has focused especially on rural society in the Eastern Cape. His research and teaching explores the intersection between social, political and environmental issues at a local, national, and global scale. Professor Beinart’s recent publications include a social history of the prickly pear in the Eastern Cape, with Luvuyo Wotshela, and a study of African local knowledge and livestock health, with Karen Brown.

Dr Alison Foster is the Senior Curator of the Oxford Botanic Garden and the Harcourt Arboretum. She worked for over a decade in the pharmaceutical industry as a medicinal and subsequently process chemist before moving into horticulture. Dr Foster’s particular area of interest is medicinal plants and she has written a book to accompany the new medicinal collection at the Botanic Garden. She is also working to build a portfolio of research collaborations using the plants at the Botanic Garden.

Dr Laura Rival is a Lecturer in the anthropology of nature, society, and development at the University of Oxford. Dr Rival, who has conducted extensive fieldwork with the Huaorani of Amazonian Ecuador, has studied a wide range of conceptualisations and uses of the Amazon biome, including the mechanisms by which humans know and symbolise the biological world, reproduce and transform their social and cultural worlds, and contribute to the making of the forested landscapes they inhabit. Dr Rival’s research interests include issues in Amerindian conceptualisations of nature and society, historical ecology, the impact of national development policies on indigenous peoples, learning and knowledge acquisition, and Latin American identity politics.

Jade Whitlam is a PhD student at the University of Reading, specialising in Archaeobotany. Her research concerns the origins and emergence of agriculture in southwest Asia, the domestication of plants and the human-plant relationships central to these processes. For her doctorate, she is investigating plant use and Early Neolithic societies of the eastern Fertile Crescent ca. 10,000 – 5000 BC, with a specific focus on sites from the Central Zagros regions of Iran and Iraqi Kurdistan.